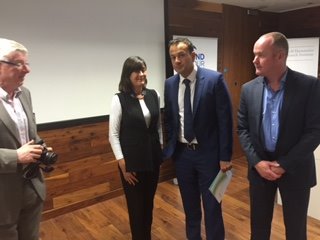 On the 14th September 2015: A campaign to tackle acquired hearing loss in adults was launched by Minister for Health Leo Varadkar. The aim of the “Mind your Hearing” campaign is to raise awareness of acquired hearing loss and to encourage people to get their hearing tested earlier and, if necessary, to obtain hearing aids. One in every six people in Ireland has some level of hearing loss. Pictured to the right is our own Leona Kane, who is the Secretary of ISHAA, with the Minister at the campaign launch.

As people get older their hearing deteriorates so that by the age of 60, one person in three will have a ‘significant disabling hearing loss’. Speaking at the launch the Minister said “less than one third of adults with hearing loss have a hearing aid. Loss of hearing can be gradual, sometimes barely noticeable. This means that people tend to wait around ten years to address their hearing loss, and lose out on the benefits of early treatment. That’s why the ‘Mind Your Hearing’ campaign is so welcome, and will encourage people to take action earlier.

It may also highlight other conditions caused by hearing loss such as depression and isolation.” According to Professor Sabina Brennan, Director of NEIL Memory Research Unit in Trinity College, “hearing loss leads to loneliness and social isolation which are actually as bad for your health as smoking and obesity. However by addressing your hearing loss and staying socially engaged you can maintain your brain function and may even reduce your risk of dementia.

At the event, the Minister officially launched a video, which includes the personal experiences of a number of people with a hearing loss together with a brochure giving information and advice to people on how to check their hearing. A website giving advice to people concerned about hearing loss also went live today and can be visited at www.mindyourhearing.ie