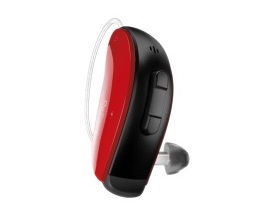 It appears that the majority of users are impressed with the aids, their abilities and the experience they deliver. ReSound's release of their new line of Made for iPhone hearing aids, the ReSound LiNX2 (LiNX squared) has come hot on the heels of their release of a new Smart App with new features .

With this release, ReSound is once again leading the pack in the Made for iPhone hearing aid space. The LiNX2 is available in the same 3 technology levels as the previous generation, that being the top of the range 9, the 7 and the 5, but they are offering an expanded range of styles that include for the first time, custom hearing aids.

Up to now, Made for iPhone hearing aids have only been available in the behind-the-ear styles. ReSound have now introduced custom made hearing aids to their line up! Along with the popular BTE and RIE styles, the LiNX2 is available in the following additional custom styles: IIC, CIC, ITC, ITE and MIH. However, only the ITC, ITE, and MIH styles are wireless capable and compatible with the ReSound Smart™ App and can support direct audio streaming. In addition, the RIE and BTE styles have also had an updated redesign, with new casing and user controls.

Updates to the Smart app

One of the biggest problems for individuals with hearing loss is hearing speech in noise and wind. New personalization options within the app that are only for ReSound LiNX2 users includes sound enhancement features to better personalize these difficult listening situations.

Enhance listening comfort on the go

For ReSound LiNX2 9 wearers: you can further enhance your listening comfort with Sound Enhancer. (Coming soon for Android users)

Reduce noise levels in loud environments so listening is more comfortable and speech easier to understand. The simple interface on your phone allows you greater control over the noise in whatever situation you are in. 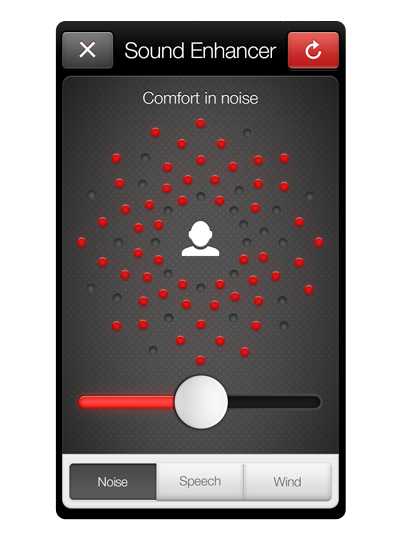 Choose exactly what you want to listen to. Imagine the focus of your attention as a beam that you project forwards. Speech focus enables you to adjust the width of this beam, so the speaker’s words sound clearer even in  tough listening situations 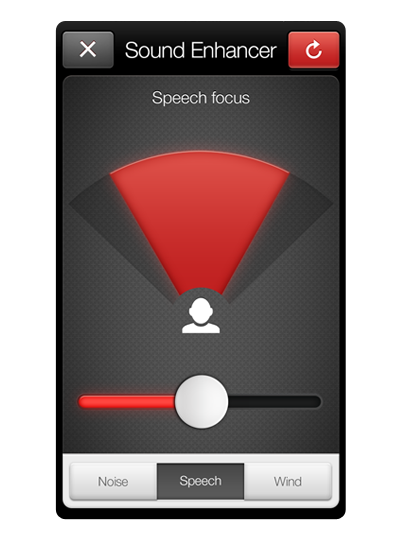 Activate the wind filter to reduce the amount of intrusive wind noise on a windy day for maximum listening comfort – with minimum effort. Golfing or walking in the park will become a pleasure as you can converse with your partner even in wind. 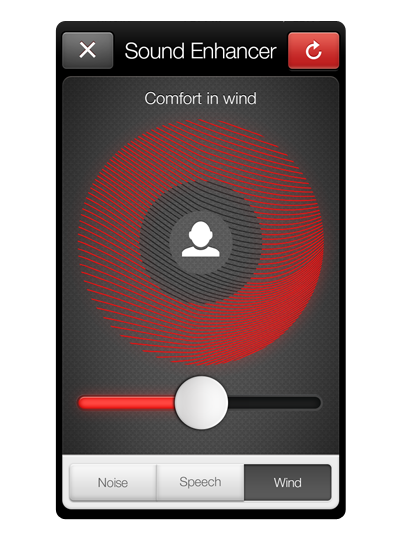 Surround Sound by ReSound has been around for a while. Surround Sound is ReSound’s system for processing sound which helps users determine the direction sound is coming from, and automatically alters the output of the hearing aids to match the acoustic environment. In the LiNX2, ReSound have introduced a new improved Surround Sound system. The feature has been greatly improved with the introduction of Binaural Directionality™ II, and an all new feature, Spatial Sense™. Binaural Directionality™ was utilized in previous ReSound products, like the Verso, and the original LiNX, but its second generation is now available in the LiNX2. Spatial Sense is a brand new feature focused entirely on helping you as a wearer localize sound and have a better spatial awareness. In order to take full advantage of the new Surround Sound system , you’ll have to invest in the LiNX2 9 in the BTE or RIE style.

The LiNX2 is ReSound’s 5th generation tinnitus solution. All technology levels and styles of the LiNX2 have built-in sound generators and six different Nature Sounds to find the settings that bring them the most relief. Using the Smart app, you can control control the pitch and modulation of the sound and create the sound therapy that works best for you. If you’d like to gain even more control, you can of course download the ReSound Relief app and introduce sounds beyond those made available through the hearing aids.